Webcast: All About World-Building (with World Anvil and 4theWords)

admin
Building a world for your novel can feel intimidating. Where do you start? How does it influence your story? Luckily, Camp NaNoWriMo sponsor partners World Anvil and 4theWords are here to help! Tune into this webcast to learn world-building tips from the pros.

World Anvil's Summer Camp Challenge: https://www.worldanvil.com/community/challenge/summercamp-2022/homepage
World Anvil is a set of worldbuilding tools that helps you create, organize and store your world setting. With wiki-like articles, interactive maps, historical timelines, and a full novel-writing software, they have all the tools you’ll need to create vibrant characters, craft a full fictional world, and write your novel!

4theWords Summer Challenge: https://4thewords.com/web/buildingsummer/
Writing quests. Monster battles. Epic loot. An evolving world to explore. 4thewords takes all of your favorite game elements and uses them to level up your writing process. Use the words you write for NaNo to defeat creatures and earn wardrobe and house rewards, all while becoming a part of an encouraging community of fellow writers from around the world.

Janet Forbes (she/her) is a fantasy author, game developer and (secretly) velociraptor, and has been building worlds since she was knee-high to an orc. In 2017 she co-founded World Anvil (https://www.worldanvil.com), the worldbuilding, writing and tabletop RPG platform which boasts a community of 1.5 million users. As a writer, Janet publishes fantasy fiction under the pen name J.D. Blythe, and was the lead author of The Dark Crystal RPG (2021) with Riverhorse Games and the Henson Company. As a D&D performer she has played professionally for the likes of Wizards of the Coast, Modiphius and Wyrd Games. Janet is passionate about teaching, and has given seminars on writing and other topics for Exeter University, GenCon, Dragonmeet, the Circle of Worldbuilders and more. She holds a BA and MA in Early Music Performance, is an experienced archaeologist, and speaks 5 languages.

Dimitris Havlidis (he/him) has been building settings for 30 years, and has made more epic, sandbox worlds than he’s had hot dinners. He holds degrees in Computing, Social Psychology (always useful for tormenting characters) and Graphic Design, and worked as a CTO for some of the top agencies in the UK. He left the corporate world to focus on World Anvil (https://www.worldanvil.com), which is now his life's work. With his wife Janet Forbes, he developed the groundbreaking Agile Worldbuilding Method, and has given talks and seminars at some of the biggest conventions in the world on worldbuilding and game mastery. He loves cheese, lemon pies and top hats.

Eduardo (he/him), or Ed for short, is a writer and the founder of 4thewords.com - an online writing community and game where monsters are defeated with words! He's from Costa Rica, does not surf, but does enjoy floating in the salt water as much as possible, loves dark chocolate, and currently lists David Mitchell as their favorite author.

NaNoWriMo (or National Novel Writing Month) is a 501(c)(3) nonprofit that believes your story matters. https://nanowrimo.org​

Webcast: All About World-Building (with World Anvil and 4theWords) 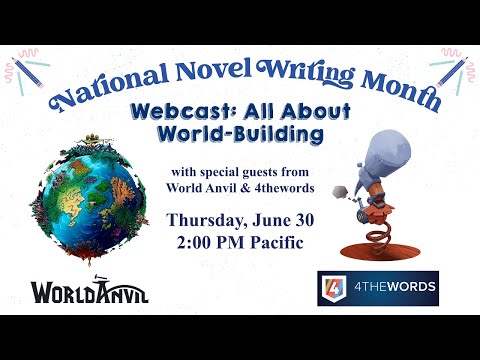 Building a world for your novel can feel intimidating. Where do you start? How does it influence your story? Luckily, Camp NaNoWriMo sponsor partners ...