admin
This event is sponsored by Finessed Media, Inc. and is hosted by Kayla Perez and Kennaisiya Miller.

Calling all forward thinking rising artists and music industry pros. Have you ever opened your browser and searched, "what is an NFT?" Well, you're in luck!

Join the Finessed Media team for a discussion centered on artist safety in the crazy world of WEB3, learn how to become involved in the Metaverse space, and resources geared towards increasing educational awareness and accessibility in the WEB3 for aspiring independent artists and industry pros.

Tavonia Evans - creator of GUAPCOIN, focused on increasing accessibility to funding for the Black community

0:00 Start Up
8:16 Introduction
10:59 What inspired you to get into the Web3 space?
16:16 What does the reality of Web3 look like for rising artists and music professionals?
21:30 How do you know which opportunities will serve you the best?
29:48 What is a misconception about the Web3 space?
38:16 Has there been any efforts in education and inclusivity in the Web3 space?
43:37 Holy grail resource?
47:36 Wrap Up

ladidai (pronounced: la-di-day) is a multi-genre musician from Yonkers, New York, focused primarily on contemporary pop, R&B, and hip-hop music. Her distinct style has caught the ears of music professionals associated with Rihanna, Ariana Grande, Justin Bieber, Mary J. Blige, Drake, and Chance the Rapper, among others. Due to her masterful ability to create music that incorporates both infectious melodies and nuanced lyrics, ladidai has distinguished herself from her peers, placing in songwriting competitions with organizations such as ASCAP and istandard.

Namely, she was a recipient of the 2018 ASCAP Foundation Harold Adamson Lyric Award for Rhythm & Soul. Her music has been licensed to several major networks including Fox and NBCUniversal. ladidai desires to expand her reach in music creation and to continue to connect with other talented, diligent music professionals in order to create enjoyable, timeless music for the masses.

She has worked with artists such as Ashanti, Monifah, Mickey Shiloh, J-Sol, Taliwhoah, Indyamarie, and companies such as EQ Exchange, HRDRV, Gender Amplified, The Music Business Association, and UnRestricted_Live.

Beyond her craft of music making, ladidai is involved in several operations that champion independent music creators including HRDRV, a full service independent music creator community, and Gender Amplified, a 501(c)(3) nonprofit organization that champions female identifying and non-binary audio professionals in the music industry. Most recently, she is the Social Media & Community Manager for EQ Exchange, a web3 music startup co-owned by Ashanti.

Tavonia Evans is a 47 year old native of New York and “mompreneur” with a 20+ year background in technology. She is a 4x founder, Engineer, Designer, Data Scientist, and she founded the decentralized cryptocurrency Guapcoin. Tavonia’s vision is to use Guapcoin for the economic empowerment of black people and especially black-owned businesses.

Not new to the world of startups, Tavonia made the transition into the world of Blockchain in 2016 as a result of identifying Cryptocurrency as a tool that could stimulate economic growth and financial freedom within the Black community. She is one of the first Black women heralded as being the founder and lead engineer in developing a coin with such a mission within the Black community. She was featured in Glamour Magazine’s May 2018 “Women in Crypto”, as a crypto expert to CNN, Complex TV, CNBC, Marie Claire, Blavity, Ozy – as well as other media publications for her work in the space.

Since 2017, she has been an expert global voice for blockchain, and has spoken on diversity and the impact of blockchain technology in a variety of forums. She has made it her mission to educate both minorities & women on the potential of cryptocurrency to liberate the masses from poverty while providing greater access to funding.

Finessed Media is a New York City based start-up focused on developing content in all things music entrepreneurship and creation. The company was founded in January 2020 with the mission to provide resources for a worldwide audience interested in making it in the music industry in any capacity.

Our contributors spotlight music and stories of artists, A&R reps, DJs, music tech executives, radio hosts, and more to speak on their experiences and share insight for others to learn from. These stories are provided via videos, online lessons, news updates, and events.

The Finessed community has grown into a global audience for its work in promoting all genres and for providing a platform for all aspiring music industry entrepreneurs. 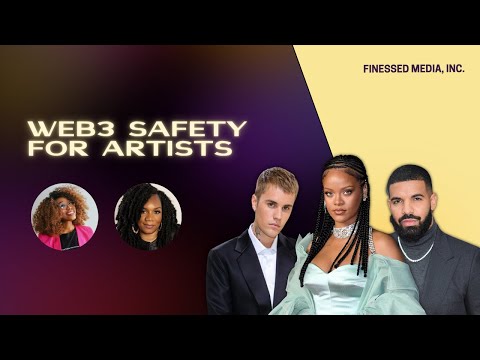 This event is sponsored by Finessed Media, Inc. and is hosted by Kayla Perez and Kennaisiya Miller. Calling all forward thinking rising artists and mu...