admin
►► Sign up to ProductionCrate for free or paid membership to access their amazing library of assets:
https://productioncrate.grsm.io/steveramsden2434

►► Learn how I plan, shoot and edit VFX and learn more about my course in my FREE webinar: https://www.diymoviemaking.com/pl/2147517057

Steve Ramsden with DIY Moviemaking here, and this week I’m going to show you how to swing on a web like Spider-Man!

Today’s video is sponsored by our friends at Production Crate, a fantastic all-in-one assets hub for your filmmaking.

Spider-Man is always fun, and as it’s been a while since my last “Superhero” video I thought it was time to have a go at swinging on a web like Peter Parker in No Way Home. Today I’m going to show you how you can make your own simple spider-man web swinging VFX shot using nothing except Adobe After Effects. I’m always trying to do a lot with a little, and make great effects shots on a budget, and if you want to see lots more fun DIY Moviemaking tips and tricks, then hit that subscribe button.

So I deliberately went out and filmed this effect totally solo to prove you can do all of this on your own. As a quick disclaimer though, in my opinion this method is always going to look pretty cartoony by its very nature, so just bear this in mind if you’re going to attempt it!

The first thing I was looking for was something the web could swing from, and I used this telegraph pole in a quiet location, but you could use the corner of a building or anything else convenient. Now you really only need to film one shot for this effect. This is a wide shot with the object you’re going to be swinging from right in the middle, and I would suggest that you deliberately keep your phone or camera quite far off while filming this, so that you won’t have many perspective problems when coming to do the edit. So my shot has the pole in the middle of the frame and enough room on both sides to film me firing the web and starting to swing from one side, and then - because I figure I’m just a ‘trainee’ Spider-Man - it goes wrong and detaches and then I fall to the ground on the other side. For this shot I set the camera rolling, ran over to one side of the pole and acted the first half of the shot - firing the web at the top of the pole and jumping as if I was being pulled into the air by the web. Then I quickly moved to the other side of the pole, and then jumped and landed on the ground as if I had fallen off the web. While you’re rolling, it’s also a good idea to get a few seconds of what’s called a ‘clean plate’ meaning the same shot but without you in it at all. This can come in handy later on. And that’s all you really need to film.

So first I opened the master shot in a new composition inside After Effects. I duplicated it and named one ‘start’ and one ‘end’. I cut down the ’start’ clip to end at the moment when I am jumping and I am in a good position in the air. Then I did the same with the ‘end’ clip and cut off everything except me landing. So now we have a start and an end, and we need to create the part where I am swinging in the air to hide the join. So to begin building this, I duplicated the ‘start’ layer agin and renamed it ‘figure freeze frame’. I trimmed it down to that single frame where I am in the middle of my jump, and the right clicked on it, went to Time, and Freeze Frame. Now this layer is frozen, and next you can use the Pen Tool to draw a mask around your figure, and you can soften the mask edge a little bit if you want using Mask Feather. Once this is done, now we are going to change its movement using keyframes on the Position and Rotation controls to make it look like it is being pulled by the web.

For the spider web I headed over to our sponsor Production Crate where they have a ton of really fun Spider-Man-style web elements, already created from every possible angle. I shuffled the Position controls until the web was over the top of the pole and set it to rotate during the swing. Now I could parent the figure layer to the web layer, and this means that wherever the web moves, the figure will now move too. So now you can keyframe the rotation of the web so that the figure ends up on the other side, around the point where the figure will land and turn on the ‘motion blur’ toggle to on the web and the figure layers make the quick movements look more natural.

Another trick is to animate this freeze frame figure with the Puppet Pin tool. This lets you click on various points and then animate them over time, just like a puppet. Finally to make the shot more interesting with some camera movement, I Precomposed everything into a new composition and used the Position and Scale keyframes to zoom in and add a move which follows the action. Finally adding an adjustment layer allowed me to do some colour grading to the whole shot using Lumetri Color. 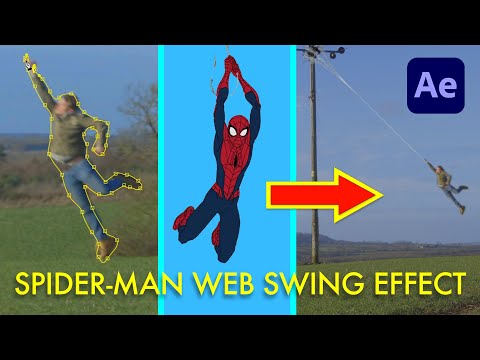 ►► Sign up to ProductionCrate for free or paid membership to access their amazing library of assets: https://productioncrate.grsm.io/steveramsden2434 ...