admin
(This video is part of the 2021 Stat-Ease DOE Summit.)

One of the powerful features coming with Stat-Ease 360 (SE360) is integration with the Python programming language. Python is one of the most widely used programming languages in the world, especially in the applied statistics and data science fields. It comes with a vast ecosystem
of packages that can do things all the way from accessing an online API with requests, to creating a neural network model with scikit-learn.

For Stat-Ease 360 we developed a custom Python package that communicates with SE360 in real-time. You can access your experimental data from within Python, then manipulating or analyzing it either with your own code, or with some of the many data analysis packages available. You can also send data back to SE360 by, for example, writing simulation data to a response in order to analyze it from within the SE360 graphical interface.
In this presentation, I will go through the process of connecting Python with SE360. I'll write some simple demonstration code to show how to extract data from SE360 and manipulate it with Python. Then I'll delve into some more complex examples, including a k-fold cross-validation scenario. 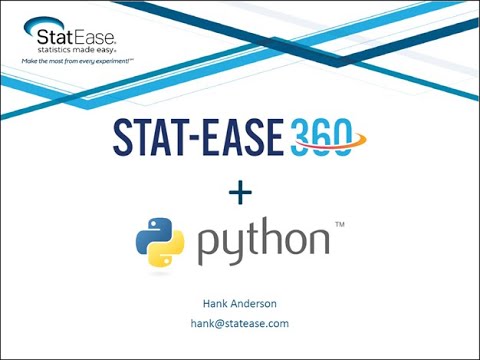 (This video is part of the 2021 Stat-Ease DOE Summit.) One of the powerful features coming with Stat-Ease 360 (SE360) is integration with the Python p...