admin
What Is a Front End Developer?

Front End Development Defined
Front-end development is the part of web development that codes and creates front-end elements of a website, which are features that are directly viewable and accessible by the end-user or client. Essentially, a front-end developer is responsible for everything you see and works to enhance the user experience to ensure it is seamless. They help create the overall design and aesthetic, in addition to debugging and using static code analysis.

Front End Developer Skills
Front-end developers are responsible for implementing visual components on a website as well as interactive features like navigation, buttons, or anything that enhances overall usability. HTML, JavaScript, and CSS are often used to make sure the visual side (or client-side) of a site runs smoothly so that users can interact freely and comfortably with it. Although some front-end developers handle web design, others work from a web designer's mock-ups.

Some of the skills required for a front end developer job include:

- A good grasp of front end programming languages
- The ability to create a responsive design
- A knowledge of testing and debugging
- An understanding of front-end development tools and features like automation, content management systems, version control systems, APIs, and frameworks.

Front End Developer Jobs
Front-end jobs range from developers who have mastered a specific coding language to those who possess a range of skills beyond the front end. Since the front end involves visual aesthetics, these jobs may also include graphic design and content. Many skills overlap between the different jobs, and specific titles may mean different things to each company.

What Is a Back End Developer?

Back End Developer Skills
Back-end developers are responsible for making web pages and applications work through back-end languages and frameworks such as Java or Ruby on Rails. They also monitor how the site is working and make changes and updates to improve the behind-the-scenes functionality.

Some of the skills required for back end developer jobs include:

Back End Developer Jobs
Back-end developer jobs typically require a strong knowledge of programming. Some companies look for developers who have in-depth skills with a specific language, while others may require the ability to program in multiple languages. A smaller organization may want someone who can work both the back and front end, in other words, a full stack developer.

MicroDegree is an ed-tech platform teaching coding and job-ready skills in Kannada at an affordable price. Our vision is to empower local engineering talent from non-metro with foundational clarity in Kannada and connect them with the right job opportunities.

For more details reach out to [email protected] 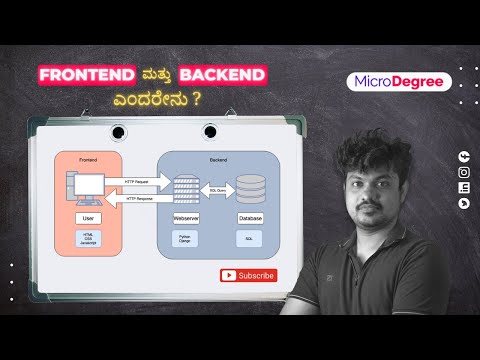