admin
This year, SwiftUI got major upgrades from the WWDC 2020. The big news is that thanks to Apple Silicon, Macs will be able to run iOS and iPad apps soon. SwiftUI is the only framework that allows you to build apps for all of Apple's five platforms: iOS, iPadOS, macOS, tvOS and watchOS with the same codebase. New features like the Sidebar, Lazy Grid, Matched Geometry Effect and Xcode 12's visual editing tools will make it easier than ever to build for multiple platforms.
In this course, we'll build an app from scratch focusing on the new techniques in iOS 14. We'll use the Sidebar and Tab bar navigation pattern, which translates well to all platforms and give you the power to adapt for any type of content. Also, we'll use Lazy Grids to make the layout adaptive to all devices and we'll learn the new Matched Geometry Effect to create beautiful transitions between screens without the complexity. This is a real app that will be launched to the App Store in September. All the source files and designs are shared so you can use this as a template to build your own app.

Lazy Grid Layout
One of the biggest upgrades is the new Lazy Grid in SwiftUI. Not only does it make your layout completely adaptive to every screen size, it'll lazy load the content for better performance. Lazy grids can be spread vertically or horizontally and can be both flexible and adaptive (similar to auto-fit in CSS Grid).

Matched Geometry Effect
With this new technique, you can create beautiful transitions between two different views. Shared elements will animate smoothly from one screen to another. This makes animations much more manageable and allows you to create beautiful app experiences without adding complexity.

Sidebar
The sidebar is now a standard for iPadOS and macOS. It makes your app significantly easier to navigate, maximizing the use of the screen's real estate. Apps like Mail with deep, multi-level content can hugely benefit from this pattern since you can have a supplementary menu.

Widgets
Widgets allow you to place interesting contents of your app in your users' Home screen, if they so choose. Implementing a simple widget in SwiftUI is very straightforward and you can separate the resources for it. Additionally, there are 3 formats: small, medium and large, and you can update the content based on the time of the day.

Install SF Symbols
Apple introduced SF Symbols 2 this year with almost a thousand more icons and multi-color icons. All these icons can be used for all of Apple's platforms for free and effortlessly in SwiftUI.

Download SF Fonts
If you're designing for iOS, it is essential to download the SF Fonts from Apple. There are 4 fonts:

SF Pro for iOS, iPadOS and tvOS
SF Compact for watchOS
SF Mono (optional) for code highlighting
New York for a serif typeface
Figma Template (optional)
As I was building this app, I created a Figma template out of necessity for the App Icon for both iOS and macOS. Also, I'm sharing the design files so you can check how I made the user interfaces.

Create a Multi-Platform app
We'll create a Multiplatform app, which allows you to build for macOS, iPadOS and iOS using the same codebase. The files and folders and neatly organized so that you can easily separate the resources for each platform. 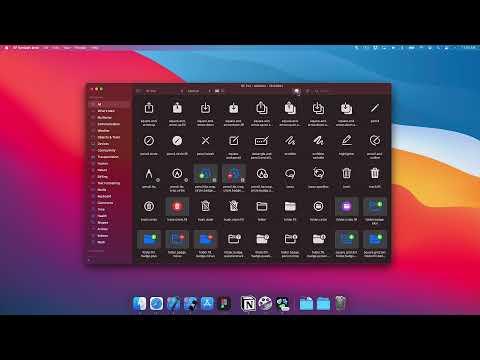 This year, SwiftUI got major upgrades from the WWDC 2020. The big news is that thanks to Apple Silicon, Macs will be able to run iOS and iPad apps soo...